“What We Will Do If Saraki Joins PDP” – Senator Adamu

Sen Abdullahi Adamu, representing Nasarawa West Senatorial District, in this interview speaks on what loyalists of the APC will do to Senate President Bukola Saraki if he eventually moves to the PDP. He also challenges the Senate President to be man enough to leave the APC. Excerpts

What does the gale of defections in the Senate portend for the polity as we approach the 2019 elections?

Take it from me that our colleagues who are now members of the PDP have made the mistake of their lives; they have committed a political blunder. You can start counting the days of failure that confronts the PDP.

All along, the Tuesday you referred to was only watershed. Those of us who are following the political activities knew they have been plotting to go. But they were not honest enough with themselves let alone the party that they didn’t want to do so at the expense of the offices they hold. They wanted to defect and retain their positions, because they knew the position of the constitution clearly. They tried to stuck on some RAPC to justify, as far as they’re concerned, something they call division. But that failed woefully.

So, they found themselves that they couldn’t succeed in the notion of a broken APC. They now said they could go by themselves to make a declaration in the Senate that they’ve left the party for another party.

For us, there’s no surprise, because these same guys who are talking of defecting have in actual fact been part and parcel of PDP from the day the president inaugurated the 8th National Assembly. They were led by Saraki. They went into an illicit accord with the PDP, and from then till that Tuesday, they have operated on the agenda of the PDP. They only wore the tag of APC, but they were not for all intents and purposes.

Unfortunately for them, the PDP, in spite of the apparent number they want to convince us about what they’re carrying to PDP, still remains the minority party in the Senate, and in the House of Representatives too. The APC alone has 53 on the ground, and APGA is working with us. The constituency of Bauchi South and Katsina where we lost Sen Mustapha Bukar, presumably their by-elections will be held this August, by the grace of God, that will come to our kitty. So, they’ve committed political blunder, to say the least and they’re going to be seen for whom they are. I’m happy.

In politics, you don’t want to lose anybody, there’s no doubt about that. You can win election by one vote. But where a person is inherently dishonest, where a person lives by breaching trust, the sooner you part way with him or her, the better. And that’s what has happened. You’ll see the APC will wax stronger in the National Assembly, because we now know who we are. We now know who is answering his father’s name, and we know those who may not know whose names they will answer. It’s now clear.

From all indications, the Senate President is going to dump the APC…

There’s no question that he’s going to dump, he’s not in the APC anymore. We were there in the presidency, the APC caucus, but he wasn’t there. So, don’t say he will. As far as we’re concerned, he’s gone.

Are you ok with Saraki still occupying the Senate President’s seat?

You don’t cross bridges until you reach them. They deliberately, because they foresaw this problem, they went on recess. We were not suppose to go on recess on Tuesday. This is the longest recess we’re having, which is about two months. The whole thing is to give them time to maneuver to do what they want to do, but it is an end game for them.

You can see proof that all this while, they wanted to go away, but they want to keep their positions. They want to eat their cake and have it. It’s very clear now. He has pushed everybody to go, and they’ve gone, and he still hasn’t made a formal declaration. It shows the extent of dishonesty of purpose and mistrust. He has no basis for you to know he is a leader who will stand up for whom he is and answer his father’s name, and stand up for the responsibility of whatever action he takes. That’s what it showed. It’s just about office, not about integrity or service.

Each time they talk about strengthening institutions, they’re talking about strengthening their bogey position of office. That’s what they’re doing, and that’s why we never agree with them. They will never play along, supporting their own government. You’re an APC man, your party has got a national mandate, you have a president, and you’re still working by the day, every one day, against the president, Muhammadu Buhari. It’s a betrayal.

If he had turned up for the meeting with the president, would you people have allowed him?

I would have sent him out. I would have told them that ‘you don’t belong here; you betrayed the president. You want to continue with the game of betrayal? Get out of this place.’

There were speculations that some of you were planning to change the leadership of the Senate on that Tuesday, how true is that?

I don’t talk about things that don’t happen. If there was an action, manifest, you can ask questions about it. But when you speculate, I don’t go for speculations. We’re talking reality. People said they decamped from one party to another, that’s a reality. I was there when it happened, and I can talk about it like I’m doing now. But whether there was an intention to change the leadership, that is speculation.

Do you think there are more black legs in the APC that would want to join the PDP?

As far as I’m concerned, again that’s speculation, and everyone of us has a right. If there are black legs, we’ll pick them.

You were reported to have said that Saraki only collated names of senators without contacting them for defection, how true is that?

I didn’t make any statement. I’m making the first statement since this thing happened on Tuesday. You see, people use us now to make a living. I can’t stop it, let them do it. The only thing is that the day they match my toe proper, they’ll know whom they’re dealing with. But if you’re in politics, people fly all sorts of things about you, and when you start to react to every little thing….

They’re drowning, and when a man is drowning and you throw a sword at him or her, he’ll pick it believing that that sword can turn to safety. I’ve been a senator, a ranking senator, and we’ve been together. I know what they say and do on the floor of the Senate. Whether there are some black legs, it’s not for me to say now. But time will tell. The leg isn’t black until it turns real black.

Why do you think the 8th Senate has been so chaotic?

Because we have the misfortune of having a leadership that has no integrity whatsoever, a leadership that started on a note of breach of trust. Once a person breaches trust, my tolerance level with him is very limited. That’s how it started. How do you see a person who is voted on a platform of a party and from day one he plots to do what that party would not want him to do? And he succeeds, carries on from one thing to another.

Are you going to move or call for his removal?

Let’s wait for the day to come. Let’s hope we’re alive, let’s hope we’re well and do reconvene. And let’s hope the matter comes up. What we’ll do will be determined by the circumstances of the event coming on our laps.

Sen Melaye was seen dancing in front of you on Tuesday on the floor and making some statements, what do you think of such action?

I’ll not forget one day when I thought we could do things properly, when I thought things happening were not quite in keeping with the integrity that is supposed to govern the affairs of the Senate, I was talking with the Senate President. Some of the things I was pointing as example was that kind of behaviour. He said to me ‘no, forget Dino is a clown.’ That’s what Saraki said to me. He’s alive, let him come out and deny saying that to me. Dino is a clown, so what do you do with clowns? And he was using him up to that day.

He came dancing and was like ‘these are the desciple of this government, and Abdullahi Adamu is one of them.’ I don’t care a hoot about that. I have more serious situations than that. A senator dancing before another senator? The Senate is a leveler. Even if I’m 101 years and I’m in the Senate and a boy of 18 years got elected to the Senate, if that was permissible age, by the time we get sworn in, we’re equals.

When somebody who is my equal would come before me and start dancing and saying things to agitate me, I’m more matured than that. I got a mission, a more serious one. My mission is for this government to feel effective representation in the Senate and my party to feel they have a good representative in the Senate, to do the bidding of my party and without prejudice protect the interest of the Federal Republic of Nigeria. Nothing happens in the Senate will divert my attention.

And you won’t stop until you unseat the present leadership?

That’s not my mission. That’s a very primordial little thing for me to do. I can’t say change of leadership of the Senate becomes my preoccupation. That will be too mean. The leadership isn’t about me or to unseat anybody. It’s about what the Senate is doing and it’s reputation and whatever we can do to enhance the credibility of the Senate. Abdullahi Adamu will be part of it. 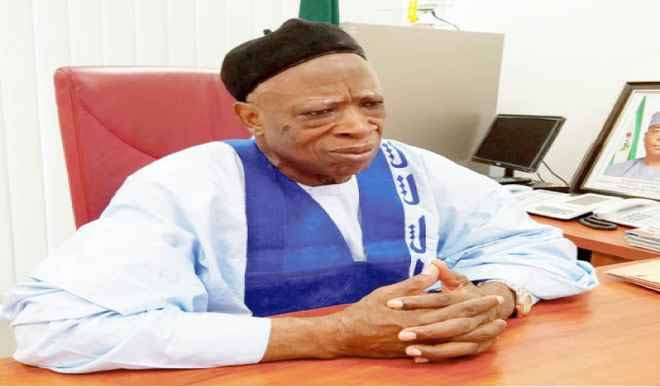 With all these things, what do you think Saraki wants to achieve?

Saraki is alive, maybe in hiding or maybe he’s free somewhere, you’re free to go and ask him. Find out from him what’s he’s doing or what he wants to do.

The man is all out to move, should he move, what will you do?

Let him move. If he’s man enough, a man of his conviction, and he wants to go to PDP, let him go. He has got his pawns gone, now he’s the king in the chessboard, let’s see the king move.

Will there be a checkmate?

Let the king move first. Let him be man enough to move.

There’s a king in the Senate chessboard now, what happens if he moves?

When he moves, then you’ll see what happens on the board. Are you a castle? Whichever position you want to take, what happens to other players on the chessboard? What move affects where you are? Are you a bishop or a knight? All these come to play.

What happens if the king doesn’t move?

Then the other players on the chessboard will move him. That’s all.

Title : “What We Will Do If Saraki Joins PDP” – Senator Adamu
Description : Sen Abdullahi Adamu, representing Nasarawa West Senatorial District, in this interview speaks on what loyalists of the APC will do to Senate...
Rating : 5
Related Posts: freebeat, Music, Video