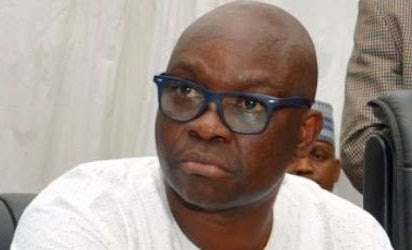 Former Ekiti State Attorney General and Commissioner for Justice, Mr. Owoseni Ajayi, has revealed that the PDP house started crumbling under Governor Ayodele Fayose because of his refusal to listen to advice and give room for reconciliation in the party.

He added that Fayose’s alleged arrogance, taking the people for granted and stabbing those who helped him back to power in the back, caused the defeat of the PDP governorship candidate, Prof. Kolapo Olusola,

Another factor, according to him, was the mass exodus of leading party members who contributed to Fayose’s victory in the 2014 governorship election which rendered the platform very weak to face a very formidable opposition.

Speaking with Journalists in Ado-Ekiti on Saturday, Ajayi maintained that the July 14 governorship election won by the governor-elect, Dr. Kayode Fayemi, was free, fair, transparent, credible and would stand the judicial scrutiny of the Election Petition Tribunal.

Ajayi said Ekiti people could no longer tolerate the alleged overbearing attitude of Fayose and attempting to remain in power by proxy hence the decision to vote massively against PDP.

Ajayi dismissed the claims in some quarters that the last governorship poll was manipulated. He also added that Fayose’s waning popularity occasioned by disrespect and arrogance shown to key PDP leaders was partly responsible for why he lost his local government area (Irepodun/Ifelodun) despite his status in the party.

He revealed that Governor Ayo Fayose allegedly dissolved the State Executive Council to deny him the opportunity of becoming a Senior Advocate of Nigeria (SAN).

Ajayi also disclosed that the governor dissolved the State Executive Council a day before he faced a panel of interviewers of Legal Practitioners Privileges Committee (LPPC) for the award of SAN in 2017 which made him become a former attorney general and reduced his rating for the rank.

According to Ajayi, Fayose allegedly took the action because “he doesn’t want anybody serving under him to grow, develop and have a better status” adding that the action denied Ekiti an opportunity of producing a SAN for that year.

“Assuming I had succeeded in that, I would say I have gotten something out of this administration and it would have brought glory to Ekiti State and to him (Fayose).

“So, if somebody could go to such a ridiculous level, could be so mean and wicked to somebody that had served him diligently and sincerely, you will see the kind of character he is,” Ajayi said.

Ajayi, a former People’s Democratic Party (PDP) governorship aspirant was among party leaders who defected to the All Progressives Congress (APC) before the July 14 governorship poll.

The senior lawyer revealed that PDP lost his Ise/Orun Local Government Area for the first time in 19 years because of Fayose’s alleged maltreatment of himself (Ajayi) and another prominent indigene, Prince Dayo Adeyeye, both of whom were governorship aspirants.

Speaking on Fayose’s alleged ingratitude to his benefactors, Ajayi said: “There was nobody who have assisted us to come to power that Fayose has not offended; from Buruji to Senator Gbemi Saraki, to House of Reps member, Hon. Sunday Karimi to former PDP National Chairman, Alhaji Adamu Muazu, the list is endless.