In the past, Nigeria was the leading oil palm producing country in the world but today it can’t measure up to Malaysia which, incidentally, obtained the palm kernel with which to begin production from it.

Daily Trust on Sunday gathered that palm oil production is on the decline due to lack of government’s support in terms of farm inputs such as seedlings, machines, land and loans among others.

But the Nigeria Institute for Oil Palm Research (NIFOR) said it is boosting oil palm production in the country with improved seedlings of two and a half years gestation period as well as other extension services to farmers.

Some of the oil palm farmers who spoke to our reporter lamented that they are not supported the same way government is supporting rice farmers across the country.

One of the farmers, Tony Ekhigiator, said one of the major challenges facing oil palm farmers is finance because the farmers need fund to buy seedlings, control pest and maintained the farm for high yield.

“I am into large scale oil palm farming but I have not gotten any assistance or incentive from both the state and federal governments. I have been sustaining the farm on my own,” he said.

He said the Federal Government can help oil palm farmers by giving them loans so that they can acquire land to expand their plantations.

“Government can help us through loans so that we can acquire land and plant more oil palm trees. As a result of lack of fund, we find it difficult to maintain our farms, thereby incurring poor yield.

“We need money for maintenance, without it the farm will not do well. With good maintenance, a palm tree can produce 10 bunches of palm kernel,” he said.

He appealed to the government to insist on seeing the farms of farmers before giving out loans because most of those who were given such facility in the past did not even have any farm.

“There is market for oil palm in Nigeria and we get good seedlings from NIFOR and individuals but due to lack of encouragement and support from the government, we can’t expand. We need other inputs, especially fertiliser because many farmers are not using fertilizers due to lack of fund,” he said.

Also speaking, Solomon Okoduwa said getting good seedlings for good harvest is one of the challenges facing oil palm farmers in the country.

“Most farmers are still battling with the old seedlings which are not too viable and productive like the new improved varieties.

He said: “The one from Malaysia cost N2,000 per seedling while that of NIFOR and others cost between N250 and N300. The difference is that in the next 16 months, you can harvest that of Malaysia while you have to wait between two to three years before harvesting that of Nigeria.”

Okoduwa said getting milling machine for processing was another challenge affecting the oil palm farmers as they have to harvest and arrange for a vehicle that will convey the produce to a milling centre for processing in another faraway place.

“The government can help with utility vehicle that will help to convey the produce from one point to another.

“Also, the government can provide a standard milling machine and motorized harvester in one of the communities that will serve many farmers,” he suggested.

On how government can help the farmers, he said it can provide good seedlings to oil palm farmers to enable them have bumper harvest. “What we need is government support like the Anchor Borrower from CBN programme to help us embark on proper angro business,” he said.

Another farmer, Peter Aguele, identified lack of access to fund and land as the major challenges facing oil palm farmers.

He noted however the federal and some state governments are now responsive in terms of land as the Edo State government has made land acquisition easy for palm oil farmers.

“Part of the reason we are not doing well in agriculture is the issue of access to land because the Land Use Act has made access to land difficult for farmers except you have to go to your locality.

“Aside funding and access to land, research and development in the oil palm sector has been a problem. NIFOR has been doing well for many years. No business that has no research can do well. Countries like Malaysia, Indonesia and others are doing well because of their research institutions,” Aguele said.

He said, in 1963 Malaysia came here to pick palm seedlings but today they are exporting $20 billion worth of palm oil and Nigeria is still regrettably a net importer of palm oil.

“Government should try to visit the farm of anybody who claims to be an oil farmer so as to ascertain the truth. And once this is done, a situation where money is not given to the real farmers would be addressed.

“We have to join cooperatives to be able to access funds but once it is time to support us, it is the big players in the industry like Okomu and Presco oil companies that will first be the beneficiaries, he lamented.

He said NIFOR has come up with improved seedlings that government was making sure they get to farmers.

Speaking with Daily Trust, a source at NIFOR said the institute is boosting oil palm production by coming up with improved seedlings that will give better yield for the oil palm farmers.

He said aside provision of improved seedlings, the institute has come up with numerous training programmes for small and medium scale farmers through various extension methods.

“We have also developed a simple processing machine for farmers to process their produce,” the source said.

He said the institute has ensured availability of improved materials for farmers in Nigeria through the supply of oil palm sprouted seedlings and various training sessions for farmers and extension agents.

The source stated: “NIFOR has transferred the technology of raising oil palm nursery to seedlings to small and medium scale farmers.

“Through research, we have made improvement of yield potential of oil palm through breeding and selection and developed a high yield breed called Tenera hybrid with fruit to bunch ration of over 75 percent.

“We have developed seedlings that have two and half years’ gestation period. We have developed Tenera hybrid variety such as Dura, Piisifa and Tenera. The dura is thick-shelled with a thin layer of scanning mesocarp and large kernel.

He explained that the problem with the farmers in trying to boost oil production is that instead of patronising NIFOR seedlings, they buy from people who sold wrong seedlings that will not give good yield. “We have developed seedlings that take two and half years to produce,” he assured.

He called on the oil palm farmers to always patronise NIFOR for their seedlings as well as get advice on how to get better yield instead of patronising people who do not have the requisite knowledge. 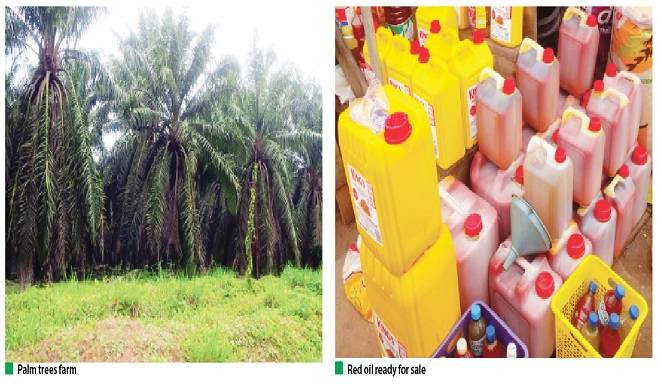 Title : Oil Palm Farmers Complain Of Little Government Support
Description : In the past, Nigeria was the leading oil palm producing country in the world but today it can’t measure up to Malaysia which, incidentally, ...
Rating : 5
Related Posts: freebeat, Music, Video