Detectives attached to the Lagos State Police Command have arrested a driver identified as Solomon James, for allegedly attempting to rob his boss and rape his master’s wife.

The suspect was alleged to have stormed his master’s home, identified as Utachy Odim, on July 21 and tried to carry out the dastardly act.

According to the police, James stormed Odim’s residence at Ademola Akande Street, Omole Estate, Lagos and held him and members of his household hostage with a toy gun. Unfortunately, the petrified Odim didn’t know that the gun was toy.

He also didn’t know that the man attempting to rob him was his aggrieved driver, James.

Before entering the apartment, James had cleverly masked his face with a woven material, so that Odim and other members of the household wouldn’t recognise him.

After James breached the security of the house, he ordered Odim to lie-face down, tied his hands behind his back and waved the gun threateningly in the victim’s frightened face.

Speaking on the matter, the state Commissioner of Police, Edgal Imohimi, said: “The suspect, after he gained access into the victim’s apartment, started ransacking the entire house.

He later asked for the victim’s Automatic Teller Machine (ATM) card. He tried to transfer money with the ATM, but he didn’t succeed due to network failure. He became aggressive and asked the victim to surrender original documents of his car and the key, which he did.

The suspect was also armed with condom; he persistently asked for the victim’s wife, fortunately, the woman was not available at that material time. He succeeded in robbing the victim N38,000, his car key and his ATM card.”

The commissioner explained that on receiving the information about the robbery, he directed police operatives to the scene of the crime.

He said: “As soon as the suspect noticed police presence, he jumped the fence to escape, but was arrested. The items so far robbed were recovered from him. During interrogation, it was discovered that the suspect was the complainant’s domestic driver, whose appointment was terminated two months ago.”

Narrating his own story, James said: “I worked for Utachy Odim as his driver. While discussing my payment, I said I would like to be collecting N80,000 monthly, but he disagreed, saying that he would rather preferred to be paying me daily.

We agreed that anytime I rendered my services to him as his driver, he would pay me N5,000. We both agreed on this. I have now worked with him for about three months.

“I know that Odim has a car renter business. I promised to bring customers to him, but it would be based on commission paid on every customer I bring. He agreed to this proposal.

I had since brought eight customers to him, but he refused to give me my commission. I got angry and decided to teach him a lesson. 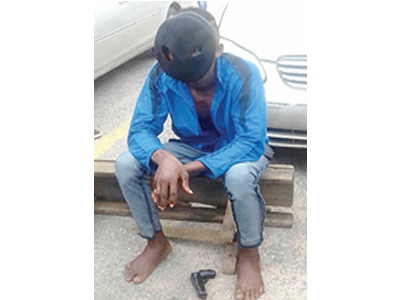 “It was a vendetta for me. I went to his house last Friday about 8p.m. It was while I was knocking at the gate that I discovered it was unlocked. I made my way into the compound.

The first person I saw was the house help. She screamed when she sighted me, and then ran in the direction of the sitting room. I went after her and there I saw my boss seated. I pointed my toy gun at him, just to scare him.

I asked him for his ATM card, so that I could make a quick transfer for some money, which I believed I had earned through customers that I brought to him.

Unfortunately, the network was bad and the transfer couldn’t go through. I got angry and became scared that I could get caught. I asked him to give me his car keys and hand over the original documents of the car to me. He did as I requested.”

Asked why he came to the operation with a condom, asking for Odim’s wife, James said: “I repeatedly asked for his wife because I wanted to let the woman know what her husband had been doing behind her back.

I was his driver and knew that he used to have sex with young girls. He cheats on everyone, including his wife. I asked after her because I wanted him to confess his sins to her himself.

As for the condom; I didn’t go to Odim’s house with the condom, with the intention of using it. As a man, I’m always with condoms. My intention was not to use it on his wife. I was hurt, because I was cheated. I forgot that the battle was not mine to fight.”

Imohimi said: “This should be a lesson. Any time you have to terminate the appointment of your domestic staff, or you have to let them go due to any situation, it is important that the agency you got the people from are contacted, everything well documented and the local police station notified, so that if there is any problem in your home, the police will know the direction to look.”