» Entertainment » News » 'The teacher,Â cleaner andÂ the school knows something and they are hiding it' - Writer, Tope Delano reacts to Chrisland School's latest statement

'The teacher,Â cleaner andÂ the school knows something and they are hiding it' - Writer, Tope Delano reacts to Chrisland School's latest statement 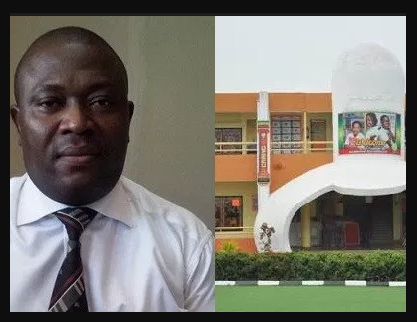 This morning, Chrisland School issued an official statement assuring parents of their children's safety and accusing the press of being paid to tarnish their hard-earned image.

This comes after reports surfaced online two days ago of a 47-year-old supervisor in the school, Adegboyega Adenekan, who allegedly sexually molested a 2-year-old girl in the school.

Ade was accused of molesting the little girl who was in the VGC branch of the school in November 2016. A video recording of the little girl describing how the school supervisor molested her was played at the Ikeja Sexual Offences and Domestic Violence Court on Monday February 12th.

To say that my entire being bleeds at the thought of this alleged heinous crime, will be an understatement.

Hours ago, the nation was greeted with the news of a Chrisland school supervisor Mr. Adegboyega Adenekan, who has been accused of raping a 2-years old on multiple occasions, as well as her friend. The case which has been in court since 2016, came to a climax when the child, who is now 4, supposedly gave a graphic description on how she was on several occasions raped by the 47-year old husband and father.

This alongside the mom’s testimony, psychologists and the school’s move to hire a SAN to defend Adenekan, got me even more interested in the case, so I began my research and here is what I found.

Back in 2016, Mr. Adegboyega Adenekan was picked up by the police for allegedly molesting this 2-year old. The child’s mother, who spoke to Punch correspondents back then said she discovered the soul wretching crime when she took her child to the toilet and as per her usual behavior, warned that she does not allow anyone touch her ‘wee-wee.’

This prompted the child to open up to her mother about the assaults and upon further questioning, she fingered Mr. Adenekan as the one who assaulted her. The mother’s next move till this moment has me paralyzed to my soul, mum decided she didn’t want the world to know about it, picked up her phone and called the alleged pedophile.

Here is what she said:

“On November 10, I took my daughter to the toilet. And as I normally do, I warned her not to let anybody touch her ‘wee, wee’ (private parts). Then she said, ‘he put his wee wee in my wee-wee.’ I asked who? She said Mr. Adenekan. She is two years old, but she can describe everything graphically. As a mother, I wanted to cover it up. I went to the class teacher and asked her whether my daughter discussed anything with her and she said no.’’

Now let’s start with the mother;

As a mother, she wanted to cover it up? Really ma'am? As a mother isn’t it your job to fight for your child? Isn’t it your job to protect her, and not only her, every other child who spends most of their time in the same environment as this man? Your child according to today’s report is a brilliant child, what happens if, after a few years from now, she comes across your initial interview and reads what you said, how do you think that will turn out?

Chrisland is a school for the elite so I am 95.5 percent sure the teachers are not mediocre’s at their job. As a class teacher living in a country that sees a child between 0-11 been raped on a daily basis, nothing in you clicked to find out where this child was always been taken to whenever she leaves the class? She was 2, which means you always have to oversee them. You should know their whereabout. should she stay longer than she should, assuming she had to use the loo by herself, isn’t it your job to find out where she is coming from?

This being said, This child mother did not stop there, she further complicates the issue by saying she called Adenekan and asked him never to abuse her child, threaten her and not mess with her psychological state, so whenever he sees her, he should wave.

Wow, an alleged pedophile should wave at your 2-year old after all the alleged damage done? Really? What exactly is he waving at, ‘Oh mummy said to wave and act like nothing happened, but ama see you later in the corner,’ because for the life of me, I can not understand why she would ever in this world and the one to come should it ever, want this man a mile close to her child. I mean, how do we explain this.

The case came rushing to a climax when Adenekan replied her statement, according to him, she can go ahead and tell people what happened no one will believe her because he is a pastor.

I have a million and one things to say about his pastor statement, but I will leave it to everyone who knows just how much havoc religion has caused in the nation.

Now to the present, I was woken up with a link to a website which reported that Chrissland school, released a statement to allay the fears of parents.

Dear Management of Chrissland Schools, in 2016 when this evil happened, you managed to hide your supervisor from the shaky yet long arms of the law.

Not only this, your school doctor could not ascertain that the girl had been abused yet two different clinics confirmed this.

The cleaner at your school then confirmed the child was close to Mr. Adenekan, but the teacher who is her overseer in school, said nothing of such happened, yet, all parents need not fear. Please bring your millions, parents, and enroll in our amazing school filled with pedophiles, liars, and terrible caregivers, because you have a name, right? Right??

“He said I should tell anybody if I like and that nobody would believe me because he is a pastor. And truly, when I got to the school on Monday, everybody said it could not have happened. He is a supervisor in the primary school section; he has no reason to be in the nursery section. A cleaner in the school told me that my daughter and the man were close.

I was sexually molested twice when I was young, and I am a mother who lives in intense fear every day hoping and praying that no one harms my child, so yes, this case speaks to my soul.

Owners and management of Chrissland schools are parents, even if they aren’t, am certain you people did not fall from the sky, you have families who have kids, now ask yourself, if this had happened in your immediate environment, would you be acting the exact way you are right now?

In 2016, when Adenekan spoke to reporters, here is what his smug looking court face in court said;

“On Friday, November 11, I got a call around 8 pm from the child’s mother. She alleged on the telephone that I sexually abused her daughter. I asked her when and where? She said she wanted it between the two of us. When she dropped (the call), I was disturbed.  The following day, the child’s father called me from abroad and also said I assaulted his daughter sexually. I said I didn’t know what he was talking about.

“I have never been alone with this girl; I have never bought any gift for her; I have never taken her out anywhere. So, I was so shocked. I called the head teacher and told her about the allegation by the parents. I know nothing about this allegation. I am calling on the police and other security agencies to do their investigation.

Let me also add that a polygraph test was done on Adenekan and it concluded that Adenekan was being deceptive.

The test read in part;

“The polygraph examination was conducted on Tuesday, November 15, 2016, on Mr. Adegboye Adenekan, based on the alleged sexual molestation on (name withheld), a pupil of the school.

“The relevant questions used during the test were: did you molest … sexually? Did you have sex with …? Did you fiddle …?

“At the end of the test, Mr. Adegboyega Adenekan was deceptive and therefore was found guilty of the allegation. Copies of the report of the polygraph test and the consent form signed by the subject are attached.

“In conclusion, we are of the professional opinion that Mr. Adegboyega Adenekan was not truthful when he denied the allegation of sex molestation against ….”

In conclusion, there is more to this story and yes, unless people stop placing such heavy stigma on rape victims and those associated with them, then more truth can be uncovered because I believe the child’s friend's mother who refused to speak, knows something. The teacher, the cleaner, the school knows something and truth may be evasive for now, but it will definitely come to light in no time soon.

Title : 'The teacher,Â cleaner andÂ the school knows something and they are hiding it' - Writer, Tope Delano reacts to Chrisland School's latest statement
Description : This morning, Chrisland School issued an official statement assuring parents of their children's safety and accusing the press of being...
Rating : 5
Related Posts: Entertainment, News

0 Response to "'The teacher,Â cleaner andÂ the school knows something and they are hiding it' - Writer, Tope Delano reacts to Chrisland School's latest statement"