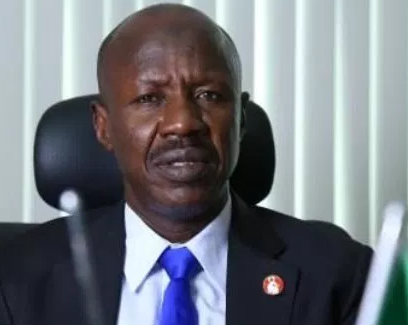 The faceoff between President Buhari and the Senate over the appointement of Ibrahim Magu as the acting chairman of EFCC in 2015, took a different direction yesterday after a Federal High Court in Abuja ruled that the senate can reject Magu's appointement.

The senate had on two occassions rejected Magu's confirmation as the chairman of the antigraft agency. The senate based its decision on a report released by the State Security Service accusing Magu of corruption and abuse of office.

After the ruling delivered by Justice John Tsoho, the senate called on President Buhari to immediately sack Magu.

Speaking to newsmen in Abuja, the spokesperson of the senate, Senator Aliyu Sabi Abdullahi, said President Buhari has been offered an opportunity to end the non confirmation of his nominees, numbering about 40.

“It is our hope and prayer that our amiable President will definitely submit another nominee to carry on with the work. By this judgement we hope the Executive would be guided and do the needful so that we can move forward. For those who have been worried that Monetary Policy Committee (MPC) has not met, this is a window to make them meet,” he said.

The plaintiff in the matter, Oluwatosin Ojaomo in his originating summons urged the court to hold that the role of the Senate under Section 2 (1) (a) (ii) (iii) of the EFCC Act is to ensure that the nomination conforms with the law, adding that once the requirement for the nominee has been met by the President, the Senate was statute barred from rejecting presidential appointee.

However, Justice Tsoho in his wisdom, struck out the case for lack of locus. He said “The submission of the plaintiff however gives the impression that the Senate only exists to rubberstamp the President’s appointment of a Chairman. Such view point runs counter to the proper intendment of Section 2(3) of the EFCC Act and is misconceived.”

Whether the ruling will be appealed or obeyed by the presidency, time will tell.