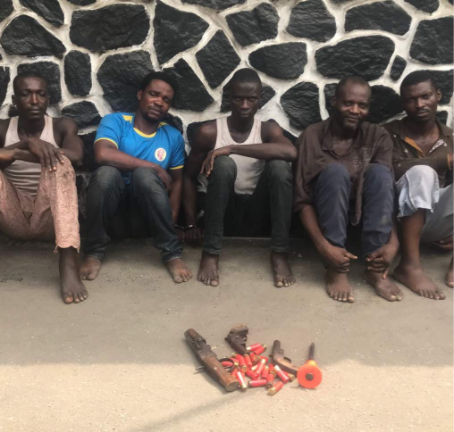 The zone 2 police command through it's zonal intervention squad have arrested some armed robbery suspects who specialize in robbing residents of Lagos/Ogun state.

The robbers within the age range of 26 and 44yrs have been terrorizing the Abeokuta, Sango and Ijoko-Otta area which falls within Lagos and Ogun state. On the 28th of January 2018, at about 1300hrs the zonal intervention squad had a distress call that the robbers were in action around Ijoko-Otta.

Upon information received the operatives moved swiftly in to action, in the process one Adediran Lateef 'm' A.k.a Ijoba an indigene of Ogun-state was arrested. The suspect whom investigation revealed is an ex-convict led detectives to hideout of his other gangs, Consequently  one Adenusi Wasiu A.k.a Babanla and Ayo Nureni A.k.a Gomes were arrested.

Upon interrogation the suspects confessed to have been in the business for years and that after every operation they have receivers who buy their stolen goods.
The receivers Emmanuel Abiola 'm' and Kayode Ogundipe 'm' (A.k.a Papa) were also arrested.

Exhibit recovered from the suspects are :
1. Two locally made pistols
2. One single barrel gun
3. Twenty-four (24) live catridges and assorted charms.

The Zonal Police Public Relations Officer SP Dolapo Badmos while briefing the media said the prompt response of the operatives led to the arrest of the suspects as  she further stated that the Assistant Inspector General of police in charge of zone 2 AIG Adamu Ibrahim has directed that discreet investigation be carried out and suspects be charged to court at the conclusion of investigation.