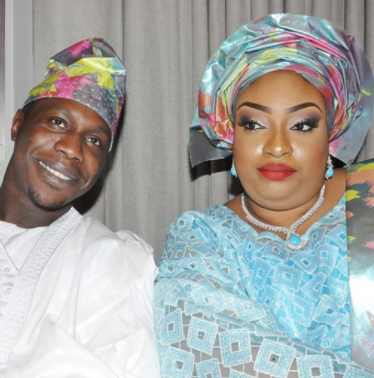 Olujowon, the son of former presidnet Olusegun Obasanjo, has reportedly abandoned his matirmonial home. Olujonwo got married to Tope Adebutu, daughter of billionaire businessman, Kessington Adebutu, in May 2017.

Olujonwo's mother, Taiwo Obasanjo, made a fuss about the wedding last year when she went to court to try to stop the wedding from taking place. Mrs Obasanjo argued that she had received a spiritual warning against her son having a big wedding. She said if he is to have a loud wedding at all, it must be done after his 34th birthday in June. Despite her pleas and objection, Olujonwo and Tope with the help of their fathers, had a flamboyant wedding in May.

In this new interview with the Sun, Mrs Obasanjo said her son and his wife Tope have not been living together in their matrimonial home. According to her, Olajuwon has gone back to his dad's house in Abeokuta and that she hasn't set eyes on her son. Mrs Obasanjo alleged that Olujowon's wife and his mother in-law have been attacking her son.

Read excepts of her interview below

Do you think it was the spiritual message you received that was responsible for the breakdown of the marriage?

I don’t know whether the marriage has broken down or not because the young man lives with his father in Abeokuta while I live in Lagos. So, I think you should direct that question to my son’s father and his wife. I am asking them both where my son is? That was why I went to the police to make reports last year. I saw my son once before the wedding when he came to tell me that, ‘Mummy I am going ahead whether you support me or not’. He defied my orders and that was why I didn’t attend the wedding. Everyone said they were above the almighty God who gave the message and I am nothing because they are the ones controlling things.

Are you saying the marriage has not broken down?

I don’t know whether the marriage has broken down and I said I don’t live with them. The only time I went there was last year after the wedding. Daddy OBJ called me after the wedding, I didn’t even want to pick his call but later I did and he said he wanted to reconcile us all. Then I went and he was asking me why I didn’t come for my son’s wedding. My two children apologized to me and we made peace that time. I also saw him when I went for a programme, which my Uncle Professor Sunbo Martins had, which was a book launch. That was last year. From that time to this time, I haven’t seen my son. He doesn’t pick my call and how did I know about this? It was even his wife that called because each time he runs from his matrimonial house, his wife will now phone me and start asking about him.  Every time this happens, she calls and this one happened since November last year, till now I don’t know where my son is. That was why I went to the police. People might say whatever they want to say, I don’t care, but I am a mother and I care about my son’s welfare. They say I am interfering but is it interference to ask if your son is okay. I called daddy OBJ and he didn’t pick my call. Daddy OBJ was picking my call before now and we were speaking. We talk, we chat and I see him but since that matter happened, now I called and he didn’t pick. So, I went to see Daddy Adebutu with my family because it was very surprising to me because from November the woman said she had not seen my son. I even went to Tope Adebutu’s house where she lives with her mother.

Are you saying that she has also moved out of her matrimonial home?

I don’t know oh! When I was asking she was the one that told me that she is in Ikoyi with her mother so I went there to see her. She told me she has not seen my son since November so I started asking people about this. If I don’t know the whereabouts of my son, should I just fold my arms and watch? Does that make me a responsible mother? I don’t stay close to them. Moreover, Abeokuta to Lagos is not one-minute drive and since they got married I have never interfered and I don’t go there. So the young man has gone into hiding and this is not the first time this is happening.  He has been running away from this girl, he would disappear and then when they settle the matter he will come back home. Now everybody said they are tired because every time they are always quarrelling.

You mentioned earlier that you called daddy Obasanjo but he has not been picking your calls. Does it mean that he held you responsible for the problem in the marriage?

He is the one that should be held responsible for whatever problem now because I heard that this young man has been reporting this matter to his father. This girl has been threatening his life, and many times he will run away from her. This even happened two weeks before the wedding. When daddy OBJ called, I told him, go and look for my son because this game you are playing I don’t understand. How can a former head of state say that he doesn’t know where my son is? I said please nothing must happen to my son and I am going to cry out to the whole world to hear about it. I didn’t understand why he was phoning me and my son’s wife too called me. Right now they don’t know where my son is and that was why I went to the police. My son has become a fugitive hiding and daddy OBJ is insisting he stays married to this girl. There must be a reason and I don’t know the reason because he doesn’t come to me or visit me and he doesn’t tell me anything. He has never told me he had a problem with this girl and so I became scared when I heard.

Why should my son be intimidated to submit to his wife? Is it not the wife that should submit to her husband? They said the girl has been maltreating my son so much and his father his aware. He reports this girl and his father is insisting that he stays married to the girl. He has been inflicting a lot of humiliation on the young man. There are occasions when she slapped him. Can you imagine a woman slapping her husband? She disgraces him, pulls his shirt and threatens him. She tells him that she would ruin him and all manner of humiliation. She said she didn’t know that she married a 419, that it was only the name that the Obasanjo’s family have, that they don’t have money. She is just a carbon copy of her mother.  His mother joins in cursing and thretening him which his wife also does to him at home.  He has been seriously battered and that is why he is running away from his wife. How can a man be running away from his wife and they are insisting he stays with this jewel of destruction? And daddy OBJ does not deem it fit… All he cares about is that he should stay married to her.

Why do you think he is insisting that they stay together despite their problems?

That is what I don’t know but I think it is because they are both from big families and if the marriage should break up it will become a scandal.  But I am afraid for my son because we are in an era now where wives kill their husbands. So my son should stay in an unhappy marriage and whereas he has refused to make up with his first wife? He said he will never make up with her and he said he can never submit to her, that he is the head of the family. So why should he be insisting that my son should submit to his wife?