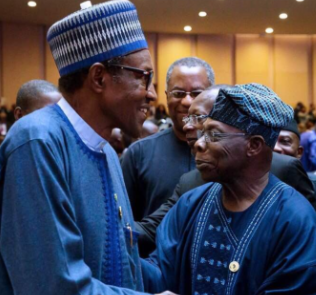 Former president Olusegun Obasanjo says his damning letter to president Buhari which he released last week was not borne out of malice or ''bad belle''. Recall that some Nigerians attacked the former president for the letter, accusing him of being jealous of the Buhari administration.

Reacting to the claim, the former president who spoke to newsmen after his registration as a member of the Coalition of Nigeria Movement in Abeokuta in Ogun state, said

''Last week, I issued a statement which I did not do lightly or frivolously but out of deep concern for the situation of our country. I didn’t do that out of malice or out of ‘bad belle.’ I did it out of my respect for that office and my interest, and I hope, in your interest and the interest of Buhari in Nigeria''.

On why he went to greet President Buhari at the AU summit in Adis Ababa, few days after writing a letter calling for his resignation, Obasanjo said ''I wonder why some Nigerians were worried why I had to pay respect to the Nigerian President at Addis Ababa. That’s my own upbringing as a well born and bred Yoruba boy. That doesn’t mean that what I have said about the President, was said out of bitterness and hatred. It is evident that the President has performed,  in some areas, good enough. In other areas not good and a proper advice was given which he may take and he may not take. I went to him just before the beginning of the opening of the AU summit. I had gone round to greet some few other Presidents, should I ignore him? So, I went to my President, greeted him and we joked before General Abdulsalami (Abubakar) said we should have a group photograph. I had wanted him (Buhari) to stand in the middle before he said I am the most senior and the photograph went viral on the social media.”