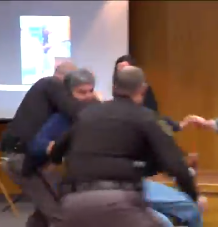 The father of three sexual abuse victims charged at Larry Nassar in court Friday during his sentencing in Eaton County.

Randall Margraves whose daughters were sexually abused by doctor Larry Nassar was in court for Larry's sentencing and he lost his cool and attacked the shamed physician. The incident was caught on video.

In the video, Margraves is seen begging Judge Janice Cunningham to give him time alone with the doctor who sexually abused his daughters but the judge refused.

"I ask you to, as part of the sentencing, to grant me five minutes in a locked room with this demon, would you do that?" he asked. When the judge stuttered for a bit, he pressed, "Yes or no?"

"No sir," the judge replies.

He then asks: "Would you give me one minute?"

"You know that I can't do that, that's not how our legal system works..." the judge was saying when Margraves lunged forward and ran to attack Larry.

Two of his daughters and other people in the courtroom looked shocked at this. One of the daughters mouthed "dad" then quickly covered her mouth as a uniformed officer immediately runs after the angry father, pulls him off of Larry, and tackles him to the ground. 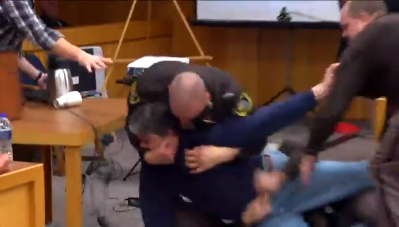 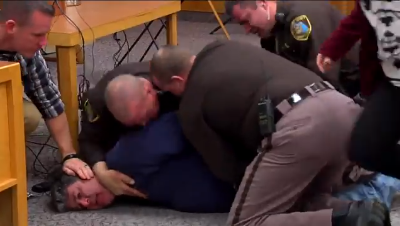 The officers cuffed him and as they tried to take him away, he looked them in the face and asked, "What if this happened to you guys?"

He was led out of the courtroom after which Assistant Attorney General Angela Povilaitis addressed the court and told them physical violence wasn't the way to go. She asked them to use their words and experiences instead.

"I don't want to see another parent get arrested or put handcuffs on, or a victim," she said. 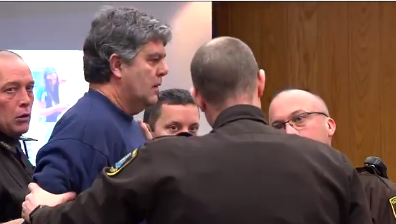 The Eaton County sheriff said Margraves is being held on the judge's orders. Cunningham will review the incident as a possible assault. The sheriff said even though Margraves didn't touch Nassar, the threat alone could warrant a charge.

Watch the video below.