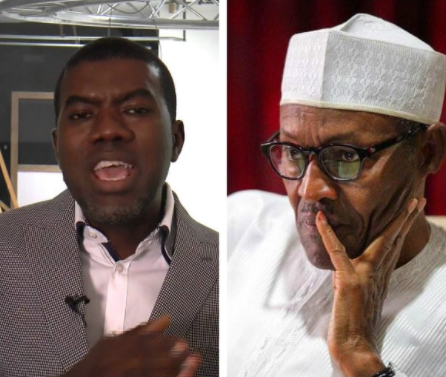 Read his piece below...

There are three intelligence agencies in Nigeria, namely DSS, NIA and DIA. Each of them is headed by Northern Muslims. Two out of the three are from the same Katsina State as President Buhari. One out of the three comes from the President’s hometown, Daura.

Is there a balance in our intelligence agencies? With no Christian or Southerner in the top intelligence strata, how can intelligence on issues like killer Fulani herdsmen and other national security challenges not be biased in favour of those who share religious and ethnic affinity with these intelligence chiefs?

But an even more important question is this: Was Ayo Oke, the sacked DG of the NIA, set up to make way for a core Northern Muslim Director General?

This is a valid question when you consider that two people were sacked at the same time, namely, Babachir Lawal, the thieving former Secretary to the Government of the Federation and Ambassador Ayo Oke.

But while Babachir Lawal, was replaced by someone from his own state of Adamawa (actually his own cousin from the same village as him), Ambassador Ayo Oke, who is from Oyo State, was replaced by Mr. Ahmed Rufai Abubakar, who is allegedly from the same Katsina state as the President but suspected to be from Chad.

But why the anomaly? Why the difference in sourcing Babachir Lawal’s successor and Ambassador Oke’s?

But it gets curiouser and curiouser. Obviously, Babachir Lawal is a pilferer. He was caught red-handed and was rightly sacked, but what was Ambassador Ayo Oke’s crime?

The flat in which US$43.4 million, £27,800 and N23million Naira ($75,000) were found was identified to be a safe house. Such practices are not strange all over the world. The money did not belong to Ambassador Ayo Oke. It was money meant for covet operations. It was not found in his account. To paraphrase the late Sabo Bakin Zuwo, it was a case of ‘government money in government house’.

Till today, many Nigerians cannot fathom why ambassador Oke was sacked.

The Buhari administration inaugurated a committee to probe the incidences surrounding the notorious Ikoyigate scandal and now four months after the Vice President Yemi Osinbajo committee submitted its report, the public still does not know the outcome of its investigation.

I understand that there may be some national security implications, but the whole story seems fishy and looks to me and many others like a set up to remove the only Southerner heading one of the nation’s three intelligence agencies and replace him with a core Northern Muslim Northerner.

At a time when Nigeria is facing an unusual upsurge in killings by Muslim Fulani herdsmen, it is suspicious, to say the very least, that the only non-Northerner is removed under a cloud and as now have a troika of core Northern Muslims manning our intelligence agencies.

As at today, these are President Muhammadu Buhari’s men that are expected to save Nigerians from killer Fulani herdsmen:

(Full disclosure, the chief of Naval staff is from the South, but the Navy has little or no role in the anti-terror war)

Never in the history of Nigeria have we had our military and security architecture so firmly concentrated in the hands of core Northern Muslims as we have today. This is nepotism on steroids. The heads of the Army, the Air Force, the Police and ALL the three intelligence agencies are securely in the hands of core Northern Muslims. Is there not even one competent Southerner that President Buhari could find to head just one of these agencies?

And Nasir El-Rufai warned us but we did not heed his warning. On October 4, 2010, El-Rufai said as follows:

“Mallam El-Rufai wishes to remind General Buhari that he has remained perpetually unelectable because his record as military head of state, and afterwards, is a warning that many Nigerians have wisely heeded. His insensitivity to Nigeria’s diversity and his parochial focus are already well-known.”

And what El-Rufai said in 2010 is eerily similar to what General Babangida said in August of 1985 after he overthrew Buhari. He said inter alia: “Regrettably, it turned out that Major-General Muhammadu Buhari was too rigid and uncompromising in his attitudes to issues of national significance. Efforts to make him understand that a diverse polity like Nigeria required recognition and appreciation of differences in both cultural and individual perceptions, only served to aggravate these attitudes.

With the way President Buhari has been so one-sided and sectional in his appointments, if he had the power, would he not have appointed a core Northern Muslim as the President of the Christian Association of Nigeria!

What sin did we commit as a nation to deserve such a lopsided government? A government that overwhelmingly handed almost the entire Nigerian security architecture to core Northern Muslims in a country almost evenly populated by Christians and Muslims.

Five months ago, President Buhari summoned Igbo elders and berated them for not calling Igbo youths to order and blamed them for the rise of Nnamdi Kanu and his Indigenous People of Biafra.

President Buhari is a Fulani elder. Using his logic, should we blame him for not calling Fulani herdsmen to order? At least IPOB didn’t kill. Herdsmen kill with abandon! The President applies rules on others that he is not prepared to apply to himself or his kinsmen. For instance, how can the Buhari government say Fulani herdsmen have the right to move around Nigeria at will and then turn around to advise Rabiu Kwankwaso that he should not come to Kano? Does it mean that killer Fulani herdsmen have more freedom of movement than a bonafide Nigerian citizen?

And why must we surrender our lands for cattle colonies as the Buhari administration would want? Is that the hidden agenda behind the blatant Northernization policy of the Buhari regime?

Let me sound a strong warning to any state that allows cattle colonies. They will take the land you give them. They will increase in population. They will appoint a king. They will ask for more land. You will say no. It is at that point that such a state will know the real meaning of the word colony. If in doubt, go and read about the history of Ilorin. History is about to repeat itself, but on a wider scale.

If a Nigerian goes to America to kill Americans, President Donald Trump will rightly ensure he is executed. If foreign Fulani herdsmen come to Nigeria to kill Nigerians, President Buhari will ensure they are given free land for cattle colony. Yet Nigerians criticize Trump!

And now that they have the total security and intelligence infrastructure firmly in their grasp, what does the Buhari administration want to do?

The unintelligent so-called minister of defence, Mansur Dan-Ali, blamed Nigerians and the anti-grazing law for Fulani herdsmen killings and amazingly declared that henceforth the Buhari administration will now monitor social media to help secure the nation.

What is the correlation?

Buhari should invest the time and money he wants to use in monitoring social media and arresting hate speech makers to monitoring farmlands and arresting killer Fulani herdsmen. Misplaced priority.

He rode on free speech to power and wants to remove the ladder that got him there. He is desperate for a second term, yet he is not performing. So what will now happen when he gets the second term and does not need our votes again? If Buhari is doing little to nothing to stop Fulani herdsmen now, imagine how much worse they will be if he gets a second term!

Let me conclude by saying that I just read how 430 Nigerian prisoners are pursuing degrees at NOUN. Buhari was overthrown in 1985 and returned to power 30 years later. In those 30 years, did he improve himself like these prisoners? He did not further his education. No degree, no books written. Even his WAEC certificate is suspect.

Electing those prisoners is better than re-electing Buhari. So today, I remind you that prayer points and social media have limited power to kick killer Fulani herdsmen and their cattle colony political sponsors out of power. But PVCs have unlimited power to kick them out of power FOREVER. So do not go for guns. Go for your PVC and change the useless change that Buhari and APC brought in 2019

Title : Electing prisoners is better than re-electing Buhari - Reno Omokri
Description : Read his piece below... There are three intelligence agencies in Nigeria, namely DSS, NIA and DIA. Each of them is headed by Northern Mus...
Rating : 5
Related Posts: Entertainment, News