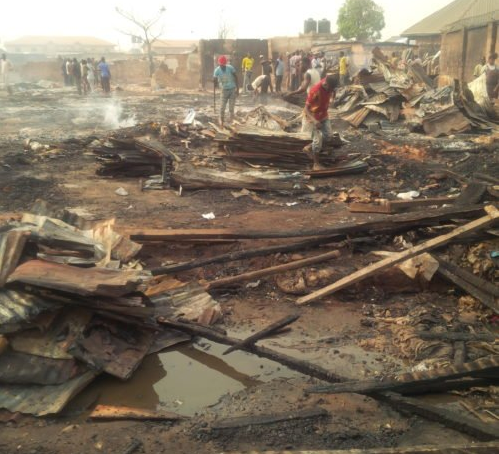 An early morning fire that engulfed Jos Adun market, popularly known as Kara market, in Benin, Edo State, on Thursday, destroyed goods worth hundreds of millions of naira in about 200 lock-up stores.

It was gathered that the market which is located at Aduwawa, Ipoba-Okha local government of the State, is mostly populated by Hausas who sell clothes, provisions, food stuff, shoes, among others.

The fire which emanated from an electrical fault in one of the the restaurants at about 9 am, also consumed other restaurants and living rooms.

One of the lucky traders whose shops were not affected by the fire, Abubakar Abdullahi, confirmed that the fire started at about 9 am from one of the restaurants in the market. “I was outside when I heard people shouting fire and when I rushedÃ¢Â€Â‹ to my shop, the fire has already engulfed most of the shops inside the market. So we started parking out belongings but I thank God that it didn’t reach my shop,” he said adding that about 30 minutes after, fire fightersÃ¢Â€Â‹ came to their rescue, but that goods worth millions of naira had been destroyed.

Abubakar said this is the third fire incident in the market since 2016.  Also speaking Muhammed Ali, whose provisions shop was razed down, said he lost goods worth over N1 million to the inferno.

Another victim, Ali Kwara, a meat seller, whose living room was affectedÃ¢Â€Â‹, said he lost money and other properties to the fire. "I don’t have a shop there but a room where I sleep. I was at the market selling meat when they called me that the place was on fire and when I arrived my house, money and properties were gone. This clothe I am putting on now is all that I have now. We lost over N10 million here. One person lost N700,000 and many other people also lost cash more than that and I am not even talking about the goods,” he said.