Bukola Saraki mocks the war against corruption of this administration 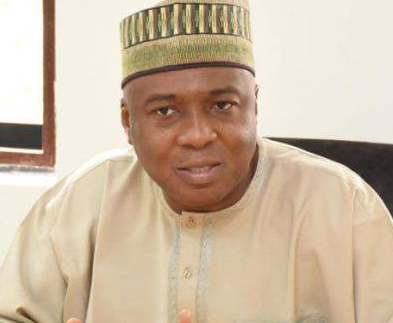 In a post shared on his Facebook page, Senate President, Bukola Saraki, threw shade at the anti-corruption campaign being embarked upon by this administration. In his post, Saraki examined his trial at the Code of Conduct tribunal CCT. He wondered why CCT chairman, Umar Danladi is now being tried for corruption. According to him, those who are serving in this government should be aware of the damage his trial at the CCT is doing to their so-called War Against Corruption. Read his post below...

I sympathize with the Chairman of the Tribunal, Mr. Danladi Umar, for his travail in the hands of the EFCC which suddenly woke up 4 days to the resumption of this case to file criminal charges against him.

You will recall that in April 2016, when our lawyers asked the tribunal chairman to recuse himself from our case, because of the criminal investigation against him, the EFCC swiftly cleared Mr. Umar of any wrongdoing.

Now, I find it amusing, that in a dramatic turnaround, this same EFCC now thinks that Mr. Umar has a case to answer just before the commencement of my case before him. What has changed since April 2016?

As much as many Nigerians want to continue to believe that this my case is merely about asset declaration irregularities, the maneuvers, manipulation, intrigues, schemes, and "House of Cards" nature of this whole case proves otherwise.

I really wonder whether those who genuinely love this Government appreciate the damage that all this is doing to our so-called ‘War Against Corruption.’ However, in all of this, my confidence in the judiciary and its ability to do justice in all cases, remains unshaken.

Title : Bukola Saraki mocks the war against corruption of this administration
Description : In a post shared on his Facebook page, Senate President, Bukola Saraki , threw shade at the anti-corruption campaign being embarked upon by...
Rating : 5
Related Posts: Entertainment, News