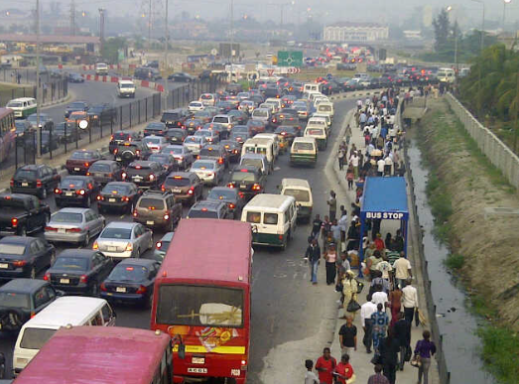 At the moment, the entire Lekki/Victoria Island is locked down due to traffic that's largely caused by the new Lekki toll gate fare that got increased today.

Many people have been stuck in traffic for hours and its still not getting better...

See all the reactions below...

Make sure you all get your PVC and vote. Don’t just complain, DO SOMETHING. My fellow lekki traffic wailers
#lekki #lekkitoll @Gidi_Traffic

I imagine that the cause of the current Lekki 1 traffic are people who didn't know (or knew but chose to ignore) about the new N200 toll fare and are trying to beg their way out. Typical.

Lekki is blocked, VI is blocked. Ambode is doing his best not to get re-elected

If u are anywhere coming to lekki, don't bother, just stay where you are.......

Why would govt inflict pains on its people? This lcc toll increase is a big blunder from Lagos state govt. It is reprehensible and unacceptable. The whole lekki is in chaos. This is madness!@AkinwunmiAmbode

There has been heavy traffic in lekki since morning. At a stage the threw open the Lekki Ikoyi and the Lekki vi toll when it became unbearable

If you are heading to Lekki just get your stove and pot and start boiling rice cos the traffic heading into lekki, first and second round about is deadly. The new increment of Lekki toll fare has led to a cataclysmic traffic lock down @TrafficChiefNG @Gidi_Traffic @_shimuel

Lekki traffic can kill. We all deserve a day off after the madness of today.Ã°ÂŸÂ˜Â¢Ã°ÂŸÂ˜Â¢

If you work in Lekki and live on the mainland, just jeje look for somewhere close to your office and go drink beer. This traffic is insane

So apparently Lekki is ‘blocked’. Been on one spot for over 20mins Ã°ÂŸÂ˜Â’Ã°ÂŸÂ˜Âª